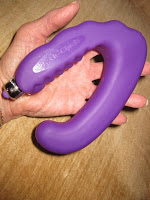 [10/18/12 update: I learned that the Rock Chick has been discontinued (good idea!), but i thought you’d get a kick out of this review anyway, so I didn’t remove it. Enjoy!]

And then I tried to use it.

I must be shaped and sized very strangely, because if the vaginal stimulator end was inserted, the other end was nowhere near my clitoris. Not even close.  Although it’s somewhat flexible — the ends can come closer or farther apart, like a pair of tongs — if I forced the outie to rest where I wanted it, the innie went too deep and jabbed me painfully. 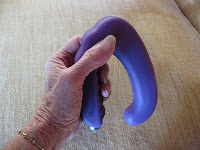 I tried several positions, trying to follow the instructions to “rock” back and forth between clitoral and vaginal stimulation, but it either missed or hurt. 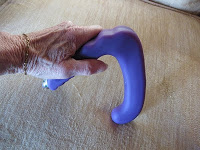 Other reviewers have different experiences, and I don’t want you to assume that yours would be the same as mine, and Babeland generously displays them all, positive and negative. I love that about Babeland — they want the customer to know as much as possible, even if the reviews turn you away.
Sorry, Babeland, as much as I appreciate the opportunity to try it, the Rock Chick just doesn’t rock for me. 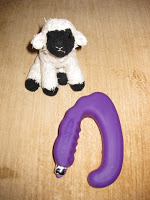