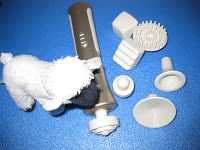 Over the decades, I discovered the Hitachi and other wonders of the world, but Wally really taught me about my sexuality in my youth, when sex was easy, available, yet confusing. I was sad to discard my Wahl at about age 50 when all the plastic attachments had cracked and crumbled and it ran dangerously hot. 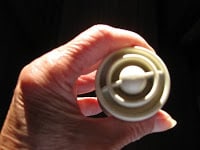 It comes with a bunch of pop-on massage attachments for scalp and sore muscles (seriously), and although I tried every one for my — ahem! – purposes, the only one I liked was this maze-like, round shape that targeted the clitoris and sort of radiated out to a larger area. I found all the attachments rather hard, not the soft rubbery feel that might be more appealing. 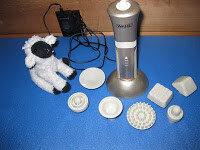 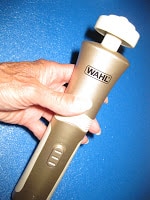 It’s shaped for ease of holding. The neck of the holder looks like it should bend, but it’s actually not very flexible. The Mini-Wahl is really noisy, and if you try to make it bend, it gets noisier.

If you’ve encountered vibrators that are too strong for you, this one probably wouldn’t please you. In fact, some women complain that it’s too strong and even “numbing.” But if you are among those of us who require extra intensity, the strength is a good thing.

Compared to other vibrators I’ve used and love, though–click here for my other reviews (keep scrolling to “older posts” — I’ve reviewed dozens of them!) — it rates maybe 3 stars out of 5. It does the intended job efficiently, but others do the same job while being prettier, quieter, and more comfortable. It’s less than half the price of some of my favorites, though, so do consider it if price is a consideration!

Thank you, EdenFantasys, for sending me the Mini-Wahl for review. 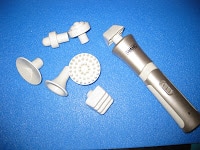