When I read this post on Charlie Glickman’s Adult Sexuality Education blog, I asked him for permission to republish it here. He covers many issues and questions about how our culture views aging and sexuality, including beliefs that we regretfully internalize.  I hope you’ll encourage young folks as well as others of our age to read what Charlie Glickman has to say here. — Joan
Getting Older, Getting Better
by Charlie Glickman, PhD

One of my favorite sex nerds, Dr. Debby Herbenick, recently retweeted something that I’ve been thinking about for a while:

True. @hotaction: “Everyone should spend some time looking at photos of naked old people because that’s what the future looks like.”

Today is the 20th anniversary of the date that I met my partner. In the last two decades, we’ve both changed a lot. We’re both much more secure and solid in who we are. We’ve grown and challenged each other to overcome many of the habits that caused friction in our lives and in our connections with other people. We’ve learned many, many ways to support our relationship. And yes, our bodies have changed, too. While I’d love to have the physical resilience that I used to have, I wouldn’t trade my current life for the one I had back then. I needed that ability to bounce back- without it, I never would have survived the drama I caused myself and others. 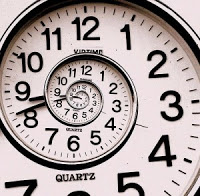 After two decades with Elizabeth, I think she’s more beautiful than ever before and I’m more drawn to her than I could have imagined when we first met. And I think about the many people who stop being attracted to their partners and trade them in for someone younger. This seems to be more common for men, but I’ve also seen women do the same thing in increasing numbers. While I’m fully supportive of people creating the relationships they want and ending them when they no longer serve them, I can’t help but wonder about our tenacious grip on the idea that younger is better and how that affects things.

In a world that only presents the latest 18-25 year olds as sexy, it’s a challenge to not compare oneself or one’s partner with that fantasy. Personally, I’ve found that became easier when I stopped watching TV and reading the drivel that passes for news (and don’t even get me started on popular magazines). But it takes more than that. Every time you compliment someone’s appearance by telling them that they look young, you’re reinforcing the idea that we lose value as we age. I feel sadness around that because it encourages us to deny our histories, to pretend we’re something we aren’t, and to create an image of who we wish we were rather than celebrating who we’ve become. And let’s not forget that many of the cosmetic treatments to make us look younger don’t work all that well and are promoted with ads that are photoshopped like crazy. My willing suspension of disbelief snapped a long time ago.

Maybe I’ll have something different to say in another 20 years. But right now, I think that the physical expression of experience and growth is incredibly sexy. It’s an outward manifestation of the individual’s evolution. Personally, I find that much more attractive than someone who strives to look like they’re still 23. This is something that many of us have to practice. When the only images that we see define attractiveness as equivalent to youth, it can be difficult to not make comparisons.

I’ve spoken with quite a few people who are convinced that nobody will want to have sex with them because they have grey hair, or wrinkles, or scars, or stretch marks, or health concerns, or any of the other effects of age. I feel sadness that they’re so sure that they’re unattractive to others because they’re unattractive to themselves. I wonder how much of that comes from never having thought of people over a certain age as desirable. I wonder how much of that comes from the fact that so much of the breathless commentary about attractiveness (especially female attractiveness) is tied up in how young someone looks. What a waste of the incredible beauty and wisdom that surrounds us, if only we could see it. 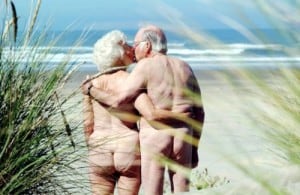 If Elizabeth and I are fortunate, we will have lots more time together. And someday, we may get to be like the people in this photograph. I look at it and see something to be celebrated. I also know that many people will look at it and feel disgust, shame, or squicked. So what are you going to do when you get to be that age? How are you going to feel about yourself or your partner(s)? Will you be able to be naked with your partner without feeling self-disgust or shame?

The time to start thinking about older people being sexy is right now. This is the time to stop shaming elders who express desire or who want to have sex. This is the time to stop mocking their bodies or describing them negatively. When you get older, you’ll be struggling with a lot of cultural momentum and the longer you go along with it, the harder it’ll be when you finally get around to resisting (if you do). That’s especially true for women and their partners, given the extra pressure and judgement attached to youth and attractiveness for women. But really, we’re all affected by the idea that younger is better.

Instead of thinking of someone as “looking good for their age,” how about simply letting them “look good”? Instead of telling someone that they look so young, compliment them on something specific like their hairstyle or their outfit. And instead of saying insulting things about older people’s sexuality, acknowledge the feeling as your own judgment. There’s a huge difference between “that’s gross” and “I feel discomfort.” The more we can change how we think and feel about elders and sexuality, the better off we’ll be if and when we get there.

I also highly recommend Joan Price’s book Naked at Our Age: Talking Out Loud About Senior Sex. Even if you’re not there yet, there’s a good chance that you will be and many of the sexual concerns that can arise are much easier to deal with when you aren’t surprised by them. Joan interviewed and quoted lots of medical professionals, sex educators, and therapists, so it’s like you’re getting the benefit of a whole panel of experts in one book. It’s amazing.

– Dr. Charlie Glickman is the Education Program Manager at
Good Vibrations, an occasional university professor, and a sexuality educator. He teaches and writes about sex-positivity, sex & shame, sexual practices and communities, relationships, and other related topics. Check him out at his website, twitter, or on Facebook.
Tagged aging, aging stereotypes, body image, Charlie Glickman, senior sex aging
← Holiday Gift Guide 2011“What I learned about my sexuality in 2011”: readers respond →