Every year, I look forward to the new edition of the Best Sex Writing series from Cleis Press. This year’s Best Sex Writing 2013: The State of Today’s Sexual Culture offers 20 sex-themed, nonfiction essays, previously published in magazines and on websites as diverse as Playboy,  Salon.com, New York magazine, The Atlantic.com, and Church & State Magazine.

Since this blog is for sex-positive people age 50+, I always check out the essays about or by our age group first. These two emerged as my favorites: 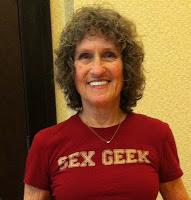 I don’t mean to imply that only the essays by writers of our age or addressing issues affecting our demographic will interest you — not at all! You’ll be as absorbed as I was by most of the essays here. Some are political; some are intensely personal. All are well-chosen and well-written. If you’re a sex geek, as I am, you’ll devour this book.

The Best Sex Writing series has fundamentally changed the way people think—and what they say—about sexuality. Rachel Kramer Bussel has collected the year’s most challenging, literate and provocative pieces on this endlessly fascinating subject.

This is not an exaggeration. Thank you, editor Rachel Kramer Bussel and guest judge Carol Queen for this superb anthology. And thank you, Cleis Press, for always being a staunch supporter of a sex-positive view of the world.

Best Sex Writing editor Rachel Kramer Bussel is a prolific author, editor and blogger. She has edited over forty books of erotica, and has been published in over one hundred anthologies. She blogs at lustylady.blogspot.com.