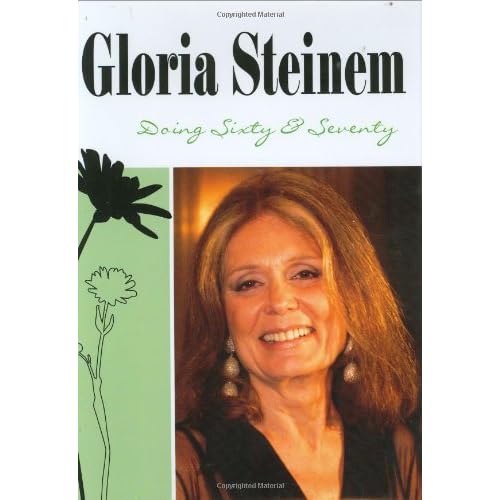 I was excited to see that Gloria Steinem has written a new book about aging, titled Doing Sixty & Seventy, and eagerly ordered it. When I saw the book — just 68 pages long and printed in a font about three times normal size, I felt cheated. It’s not a “book” — it’s a series of two essays published in hard cover. Once I got past that realization and read the essays, I was glad that I had.

Steinem, one of the most influencial feminist/activists of our time, was the founder of Ms. magazine. She became an inadvertent spokesperson for aging issues after a reporter said to her on her fortieth birthday, “You don’t look forty.”

Her widely quoted reply: “This is what forty looks like. We’ve been lying for so long, who would know?”

Steinem is now seventy-plus, and still radical. In fact, she claims that women get more radical as they age. This book includes her essay, “Doing Sixty,” plus “Into the Seventies,” a preface (which is actually an additional essay) looking back twelve years after writing “Doing Sixty.”

Some tidbits from these thought-provoking essays:

“I used to joke that I thought I was immortal and this caused me to plan poorly.”

“It was only after I’d become an old lady myself that I lost the habit of imposing my sentimental interpretation on old people.”

“For women especially – and for men too, if they’ve been limited by stereotpyes — we’ve traveled past the point when society cares very much about what we do… Though this neglect and invisibility may shock and grieve us greatly at first… it also creates a new freedom to be ourselves — without explanation.”

“I used to think that continuing my past sex life was the height of radicalism. After all, women too old for childbearing were supposed to be too old for sex. Becoming a pioneer dirty old lady seemed a worthwhile goal — which it was, for a while. But continuing the past even out of defiance is very different from progressing. Now I think: Why not take advantage of the hormonal changes that age provides to clear our minds, sharpen our senses, and free whole areas of our brains? Even as I celebrate past pleasures, I wonder: Did I sometimes confuse sex with aerobics?

I’d love to hear from you about any of these or related topics. Please chime in!