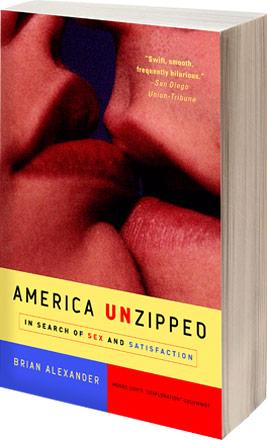 Brian Alexander’s America Unzipped: In Search of Sex and Satisfaction (Harmony, 2008), is one of the most informative and entertaining books about sex that I’ve had the pleasure of reading. Alexander, MSNBC.com’s “Sexploration” columnist, set out on a journey to explore the sexual mores and activities of middle America. Do “normal” Americans behave conservatively in the bedroom, or do they indulge in wild sexual expressions — even activities their neighbors and pastors might brand as “deviant” or “perverted”?

And yes, the people enjoying kinky sex aren’t just the young ones. Alexander doesn’t make a big deal of it when a person he interviews or observes is silver-haired, and that’s one of the pleasures of this book — Boomers and elders who are enthusiastic about sex in any or all of its variations are mingled with all the other sex-positive folks. Kitty, age 50+, poses with her nightie on, then off, her behind to the camera, and posts her photos to a Web site. Don, 49, describes his “magnificent eruptions of bodily fluids” in chat rooms. Debra and Craig, 56, are unmarried swingers “reinventing ourselves” after their divorces. A man and woman, about 70, study elaborate rope-tying techniques at a seminar at the Hyatt. An elderly woman looks through her reading glasses as she uses a kitchen whisk to transmit electricity from a violet wand over the body of her husband. “Then she shocks the bald spot on the back of his head with the attentiveness of a grandmother knitting.”

Personally, I have vanilla and monogamous taste in sex these days (I got what I needed from earlier experimentation), but I support everyone’s right to do whatever they please with other consenting adults. And, I must admit, I find it fun to read about! I did feel a bit queasy at times: Goddess Heather (a bulked-up female bodybuilder dominatrix) “has a junkyard hanging from her cooter. Every one of her fifteen labia piercings holds a chain that reaches the floor, or an old, heavy lock.” A woman (willingly) cowers in a cage at a fetish party. And all that violet wand shocking stuff was, well, shocking. But one of the wonderful things about books and imagination is that we can take magic trips into other people’s experiences and emerge understanding more about the complexity of passion.