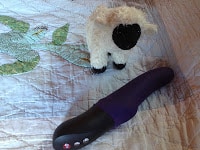 The Fun Factory‘s Stronic Eins from Good Vibrations is unlike any sex toy I’ve ever seen/ used/ reviewed. It doesn’t vibrate exactly — it moves back and forth. It pulsates. It thrusts (gently — don’t expect a jackhammer).

If you shake it while it’s turned off, you’ll feel a solid weight inside that moves around inside the toy. When turned on, the motor moves the weight which makes the whole thing pulsate in different rhythms, depending on the pattern you choose. Quite remarkable — and wonderful, if you like a gentle thrusting motion in your vagina.

Yes, it really does move like this animation. All by itself. You just insert it, angle it to reach your G-spot, and let it work its magic. You barely have to touch it to keep it where you want it, so although you’ll see your whole arm pulsating strangely as you hold it in place using a high setting, you won’t feel stress in arthritic joints. At least I didn’t.

Here’s why you’re likely to love it: 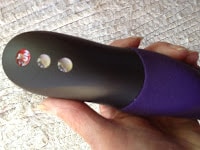 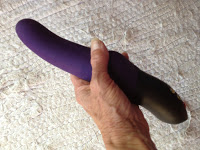 “Stronic Eins”? I don’t know why a toy this wonderful has such an odd name (does it mean something in German?), but you can rename yours. “OMG.” “Darling.” “Houdini.” “Santa Claus.” “Robert Redford.” You’ll think of something appropriate.

Seriously, what might deter you is the $199 price tag. Yow. I’ll say it’s worth it, but I also have to admit that I didn’t pay for mine — the good folks at Good Vibrations responded to my request to review it. Thank you, GoodVibes — I love my Stronic Eins.

I wonder why a $199 toy doesn’t come with a storage pouch. It needs one, because it picks up every piece of lint, dust, and cat hair in the room.

Please Note: Because the Stronic Eins technology uses magnets, it should not be used by or with anyone with a pacemaker. 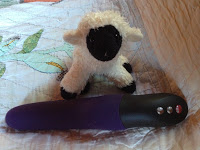