I love the Best Sex Writing series from Cleis Press. I’ve been a loyal reader since the first edition in 2005. I collect them, give them as gifts, read them cover to cover. This year’s edition (titled inexplicably “Best Sex Writing of the Year, volume 1” instead of “2015”), edited by Jon Pressick, has the breadth and quality I’ve come to expect.

Realize that this series isn’t erotica (although Cleis is known for erotica) — it’s a collection of non-fiction essays about all colors and stripes of sex-themed topics. Some of the essays are intensely personal (e.g. my own contribution, “Sharing Body Heat”), some are commentary on sexual issues in the news, some are sex-nerdy opinions, many open windows to sexual practices and worlds that might be new to you.

The best way to convey the range of topics and writers is to share the chapter titles with quotes from a few of them:

Who could resist a book with this range of topics from such a variety of writers, sex educators, performers, sex workers, and other juicy, sex-positive activists? As Pressick puts it,

Some of the topics you will read about here are very specific while others speak to all of us. Bringing them together is an attempt to throw open those doors. Pull the thoughts out from under the mattresses. Talk about sex in meaningful, thoughtful and creative ways.

One of my favorite essays — you might guess this! — was “When I Was a Birthday Present for an Eighty-Two-Year-Old Grandmother.” Author David Sterry was 17 when he was hired as a sexy birthday gift for a woman who was 65 years his senior. Although he told his employer yes, his brain was imagining “an ancient naked wrinkled saggy droopy granny spread-eagled in front of me and my poor placid flaccid penis …a lifeless piece of useless meat… What if she wants to do some weird old person sex thing I don’t know about?” The experience, of course, was nothing like his nightmare-fantasy, but I don’t want to reveal more and ruin the surprise. 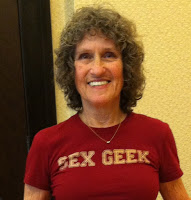 I consider myself a sex geek. I’m interested in all things sexual. Whether or not I’m personally interested in exploring a particular behavior, belief, or milieu, my mind wants to take it all in. This book really satisfied my sex geekery. Thank you, Jon, contributors, and Cleis Press.

Order Best Sex Writing from your local independent bookstore or at this Amazon link.

Tagged books
← Blogging about Senior Sex since 2005!Getting Your Mojo Back: Excerpt from The Ultimate Guide to Sex after 50 →