Yes, at the tip of the vibrator is a camera which is designed to let you take a photo or video of what’s going on inside your own or a partner’s vagina. I could, I fantasized, see what my vagina looked like relaxed, aroused, and during orgasm. I could see what my cervix did. Knowledge is power!First things first. You need to download the Siime app onto a smart phone, tablet, or laptop. The app sets up its own wi-fi network. Once the camera and the app are both turned on, you pair them using the password you’re given (you can change it, but why bother?).

Easy peasy following the instructions in the app. Now everything the camera sees is viewable on your device. You can snap photos or record videos of the inner workings of your vaginal canal to export to your personal photo gallery or, I suppose, to YouTube. (No, dear reader, I did not upload mine to YouTube because… just no.)

The truth is that it didn’t quite work that way. Truth #1: I discovered that vaginal secretions do not make for a clear camera lens. In fact, all I saw was a coated, cloudy, pinkish blur.

Aha, now I understood why several other reviewers, such as Emmeline Peaches, Penny for Your (Dirty) Thoughts, and Carnal Queen, said that a clear speculum was a necessary add-on purchase before being able to use this product as intended. The nice folks at Siime Eye told me that there’s no need for a speculum, but I don’t know where they found clear, non-coating vaginas.

So I ordered a clear speculum, size small, from Amazon. I wasn’t sure how I’d work the two together, but it turns out that the opening between the two arms of the speculum can be adjusted to make room for the Siime Eye. So far so good.

Truth #4: Older vaginal tissues are thin and fragile. (I knew that.) As I wiggled the speculum and the Siime Eye around trying to make them fit right and show what I wanted (much like robotic surgery, I’d guess), I felt enough discomfort after a few minutes to abort the operation. The discomfort persisted, and I discovered some light bleeding. That was from the plastic speculum, not the Siime Eye — which is smooth silicone, slender, and perfectly comfortable on its own. My first attempts at a vaginal selfie failed. 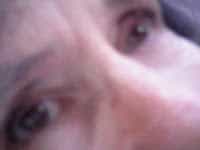 In case you want to play with the Siime Eye camera for other uses, it doesn’t give a sharp image unless you’re right up against your subject. Compare the photo of my face from just inches away (blurry) with that of my eye, close enough that a sneeze would poke it out. I wasn’t expecting the camera quality of a medical-grade endoscope, so that wasn’t a big surprise. 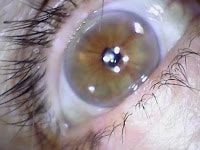 I wanted to like the Siime Eye, really I did. It’s such a cool idea, and my Svakom contact person was very helpful and patient. Playing with a partner would likely give you better results than I had solo. And if you’re into doctor play, this will be your tool of choice! I’d love to know your experiences with it.

If you’d like to try Siime Eye, it’s available on Amazon through an authorized distributor at this link or on Svakom’s own website.