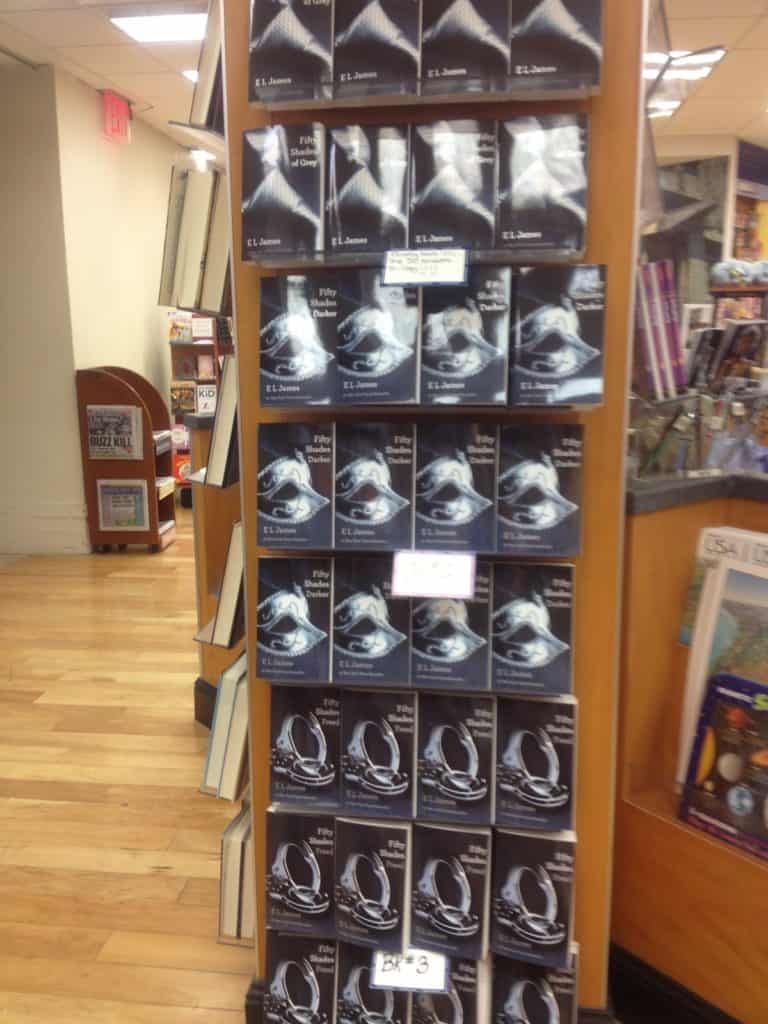 If you’ve been awake on this planet, you’ve heard of the success of Fifty Shades of Grey. It’s the Number 1 best seller on Amazon, where it sports 3,639 reader reviews at this moment.*

I didn’t read the whole book, but I did read quite a bit during a very long airport wait at JFK, where I found a mile-high display of all three Shades of Grey books. How did the author, E L James, come out with three books so fast? From the quality of the writing, I’d say she wrote them quickly, didn’t rewrite, and didn’t have an editor. Otherwise, how could she repeat herself all these ways, as an Amazon reviewer points out:

Ana bites her lip 35 times, Christian’s lips “quirk up” 16 times, Christian “cocks his head to one side” 17 times, characters “purse” their lips 15 times, and characters raise their eyebrows a whopping 50 times. Add to that 80 references to Ana’s anthropomorphic “subconscious” (which also rolls its eyes and purses its lips, by the way), 58 references to Ana’s “inner goddess,” and 92 repetitions of Ana saying some form of “oh crap” (which, depending on the severity of the circumstances, can be intensified to “holy crap,” “double crap,” or the ultimate “triple crap”)…Characters “murmur” 199 times and “whisper” 195 times (doesn’t anyone just talk?), “clamber” on/in/out of things 21 times, and “smirk” 34 times. Finally, in a remarkable bit of symmetry, our hero and heroine exchange 124 “grins” and 124 “frowns”… which, by the way, seems an awful lot of frowning for a woman who experiences “intense,” “body-shattering,” “delicious,” “violent,” “all-consuming,” “turbulent,” “agonizing” and “exhausting” orgasms on just about every page.

Readers recognize the bad writing — more than 1,000 reader reviews are only 1-star — but what the heck, it is sexy (of course “sexy” is in the eyes of the beholder). Anastasia gets lots of orgasms, and isn’t it a fantasy of women at any age to have an extraordinarily handsome, insanely rich lover who gives us endless orgasms — and, by the way, has inner turmoil that we’re convinced only we can fix by offering him our special brand of devotion?

Our age group is reading this book, too, and not just women. I enjoyed the reader review from “a male senior citizen, a semi-retired gynecologist,” whose “arthritis flared up just reading about Ana’s sexual gymnastics.” He had to take Viagra to stiffen his resolve to keep reading. 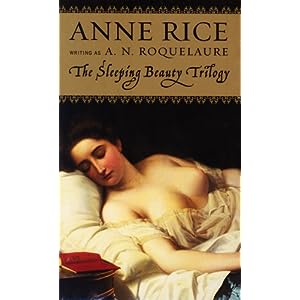 What would Fifty Shades of Grey look like if it featured a woman our age, instead of a college student? We could title it Fifty Shades of Grey Hair, and our heroine would be a woman of, say, 68, who has left a long, boring marriage and goes to San Francisco or New York City to discover her hitherto hidden sexual kinks. She hooks up with a dom who is maybe 72 and in the best of health and vigor, who uses plenty of lube while he introduces her to his special brands of toys, fingers, tongue, and penis, to bring her to the ultimate heights every few pages. I say “every few pages” instead of “every page,” because we need longer foreplay these days.

Or maybe she doesn’t find a dom — maybe she’s the domme, exploring her personal power in ways she has only fantasized.

You see how much fun this could be? Fifty Shades of Grey Hair wouldn’t suffer in any way by being about senior sex. In fact, by featuring savvy, sexy seniors, we wouldn’t need any of the lip chewing and we could be more inventive with our reactions than “oh, crap.” What do you think?

(If you love the idea of senior erotica, I’m editing a senior sex erotica anthology right now with Seal Press. I’ll let you know when it’s published!) Update: Ageless Erotica is available for your reading pleasure!

*I can’t help comparing: my Naked at Our Age has  20 Amazon reviews–all raves except for one that found it offensive because too much of it is “about how to give yourself an orgasm.” Here I thought that would be a useful part of a senior sex self-help sex guide….

I’ll admit it, I’ve never understood what could be pleasurable about pain. I’ve been in two devastating automobile accidents with residual and lifelong pain, I shattered my shoulder in ten places two years ago,  I have arthritis in my neck — I know pain. I couldn’t imagine bringing pain intentionally into my sex life. Imagine my surprise reading this in Tristan Taormino’s introduction:

When people experience pain, adrenaline, endorphins, and natural painkillers flood their nervous system. People get off on this chemical rush, which many describe as feeling energized, high, or transcendent… In the context of a sexually charged scene, some people, when they are aroused (and their pain tolerance is much higher), process a face slap in a different way: it feels good.

Oh! Now I get it. (Are true kinksters laughing at my innocence?)

I approached The Ultimate Guide to Kink knowing I’d learn something new. I had no idea how well-written it would be, how many new things I’d learn, and in what detail! The book is comprised of 20 essays on different aspects of kink, written by 15 well-known leaders in their particular brand of kink. And yes, several are our age!  Among them:
You might be surprised at the number of folks with gray hair who have been practicing BDSM for all or most of their sexual lives, as well as the number who decided (or will decide) past midlife to enact fantasies that they kept tamped down. You’ll find some of them in Naked at Our Age. This is one more hush-hush aspect of senior sex — that some of us like our sex kinky.

The assumption that variant sexualities are mental illnesses has more to do with conservative religious values than it does with objective observation. If a mental state or human behavior is unhealthy, we ought to be able to demonstrate that it makes that person unhappy, interferes with their ability to give and receive love, prevents them from setting goals that give them a sense of fulfillment, and injures their health.