I’ve been shouting about this for six years, and now we’ve got a Safer Sex for Seniors website, a video, a poster, and an advertising campaign to encourage/ inform/ bludgeon our age group to use condoms!

The campaign launched today with this video and a website filled with FAQ about safer sex for seniors written by thirteen sex educators— most members of the Sexuality and Aging Consortium. (I wrote two of these:  Tips for the Condom Conversation and 10 Tips for Hot Solo Sex.)

I think the video is entertaining enough to get people to watch and share it (though I wish some non-heterosexual couples had been depicted). Will the message get through? Certainly if people click to http://safersex4seniors.org/ it will.

Help me pass the word, will you?

My new book, Naked at Our Age, is filled with real stories from real seniors and elders about their sexual experiences, challenges, and attitudes.

I need to hear from people age 50-80+ who didn’t use condoms and now wish they had. Maybe they had sex with someone who was dishonest about revealing sexual history, STIs, HIV status. Or they didn’t ask, the partner didn’t tell, and now they’ve contracted HIV, herpes, or some other STI. Maybe they’ve unknowingly infected other partners.

If you’re willing to share your story confidentially in order to help other people who think that safe sex isn’t important for seniors, please email me. Thank you!

Tagged Naked at Our Age, safer sex
Leave a comment 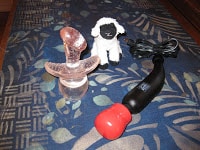 Christina from Tabutoys.com invited me to review some of their sex toys that are especially popular with women of our age. “The Miracle Massager is fabulous,” she told me, “as is the Miracle Massager G-Spot Accessory that is sold separately.” 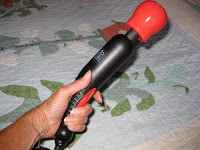 Miracle Massager first on its own, very nice. Strong vibrations but fairly lightweight and easy to hold with its ergomonically curved handle, and quieter than most plug-ins. I would have liked one more level up in strength, but I seem to say that about all my toys — I’m sure it’s plenty strong enough for most women.

UPDATE: G-SPOT ACCESSORY NO LONGER RECOMMENDED until I find out whether it is still a jelly toy, or, as TabuToys says now, “phthalate-free TPR.” It is not proven that a condom protects you from toxic materials, as I used to think. To be safe, avoid jelly toys and any toys that smell — that’s outgassing of chemicals, and you don’t want that happening in your body.

Then I added the G-Spot Accessory. If you have any trouble making the 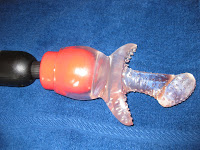 attachment slide onto the massager, a couple of drops of lubricant on the massager head solves that problem easily.


It was fun to feel the vibrations inside and out, but although the attachment is shaped to please, I discovered that the external parts landed a fraction of an inch away from the exact spots I wanted to feel most strongly. I’m a petite woman, and although I never thought about this before, the various parts of my nether regions must also be sized closer together than average. That’s probably more than you wanted to know (and more than I wanted to tell, frankly), but I need to explain why the attachment gets a lukewarm review from me, though it might get raves from you.


You may have noticed that I usually review high-end sex toys with medical-grade materials — they’re safest, most reliable, and generally most effective. I get wary when a sex toy is labeled “novelty item” — that means there are no guarantees about what materials were used. The accessory here is made of a material known as “jelly rubber” or simply “jelly,” a porous material that can harbor bacteria even when scrupulously cleaned. Jelly toys are fun — they’re comfortable, squeezable, visually inviting — so if you want to use an insertable jelly toy like this one, it’s advised to use it with a condom for safe solo sex or sharing.

About three years ago, I was contacted by a producer of The Daily Show with Jon Stewart about appearing on a segment about the rise in STDs among sexually active seniors. The segment didn’t get produced at that time because they wanted to include sexually active elders, preferably unattractive and smarmy who didn’t use condoms, who were willing to let a camera and interviewer follow them on their how-to-pick-up-a-sex-partner-escapades.

I knew TDS would ridicule these elders and the whole notion of older-age dating and sex, but I wanted to be a part of the show because I thought I could bring some dignity to the topic.

After months of trying to locate their wild elders (who were likely smarter than I was and wouldn’t agree to be ridiculed by The Daily Show), the producer gave up on the segment — or so I thought.

I went on to be interviewed on the topic of unsafe senior sex by ABC Nightline, which did a fabulous, educational, and respectful segment and included a long interview with me, featuring comments from readers on this blog, in fact.

You know what happened last night if you were watching Comedy Central. On April 9, 2009, The Daily Show aired “Dirty Bird Special” about unsafe senior sex and dating, which featured an 82-year-old horndog (“lookin’ for it wherever I can get it”) who doesn’t believe his genital warts are contagious (“warts are my penis”) and hasn’t used a condom in 40 years, although he’s getting more “tail” now than in his youth.

Although part of the segment showed vivacious Miami elders dancing, dating, and having fun, the interviewer — who admitted that thinking of seniors having sex produced “gagging sensations” — was intent on making even social dancing and dating seem seedy, ridiculous, and icky. And I hate to tell you what they did with the segment about safer-sex education at a Jewish community center. You’ll have to view it yourself .

I thank Sue Katz for drawing my attention to this show with her superb blog post about it.