If you ask me if I still miss Robert, two years after his death, I answer, “Only when I breathe in or out.”

I still start each morning recapturing a memory. Today it was the way he opened his ocean-blue eyes in the morning and smiled, his face melting with love. “Let’s snuggle,” he would say. Then one of us would decide, “I’ll snuggle you,” and we would shift to our sides, the snuggler wrapped around the back of the snuglee.

I loved when Robert snuggled me, enveloping me, so close that we couldn’t tell where he ended and I began, if indeed there was a distinction. I would take his hand in both of mine, push my nose into his palm, and inhale deeply. His palm smelled of sleep, a warm, enticing smell that was totally Robert. I can still smell his hand, still taste his skin as I kissed him everywhere my mouth would reach.

Other mornings he woke ready to meet the day, his garden or art studio beckoning, no time for snuggling. He announced, “I’m going to make you coffee,” and I always responded, “I love it when you make me coffee.” He padded out to the kitchen to grind beans, boil water, and arrange the filter cone over a metal coffee pot that had journeyed with him for decades. 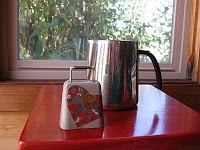 In a while he brought me coffee in bed with the newspaper and arranged both lovingly on a tray. Before bringing me my coffee, he told me once, he held the cup to his cheek to make sure it was just the right temperature.
He liked me to stay in bed while he had some quiet, private time in the morning to contemplate his latest painting or tend his garden, so he gave me a cowbell that he had decorated with a heart made of Japanese paper. I was to ring it when I desired a coffee refill.

The “make you coffee” ritual started early in our seven-year love affair, and persisted wherever we were, home or hotel, and whatever else was happening in our lives. Towards the end, when his body started succumbing to cancer, he told me, “As long as I can make you coffee in the morning, I know I’ll be all right.”

Then one morning, he tried to get up, and he couldn’t. He stumbled, his legs trembling, his back stabbing with pain, his brain unable to emerge from sleep. He sat back on the bed. “I can’t do it,” he told me, and we both cried, as I’m crying now, remembering the day that everything changed. 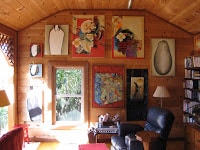 …Now I make my own coffee in his special coffee pot and carry it to the living room where I’m surrounded by Robert’s paintings. I write memories in my journal—snippets of sweet conversation, playful games we invented, afternoons that turned into evening as we made love as if life depended on it. Maybe it did. 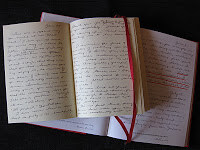 Even though I write for a living, using a computer and all the tech tools available to me, I write my memory journal in longhand. Somehow writing longhand comes from the heart more than the brain, and I rediscover memories I had forgotten.

My hand lingers over the page, and I picture Robert’s hand –the artist’s hand making love to the canvas, the gardener’s hand making love to the dirt, the dancer’s hand making love to the music, and my lover’s hand–making love to me.
During Robert’s last ten days, I held and kissed his limp hand. I told him of my love, narrated memories from our seven years together, sometimes not knowing if he was asleep or unconscious or moving from this world to the next. “Squeeze my hand if you can hear me,” I would say, and sometimes he would. Over the last week his squeeze became weak, then just a twitch, and then… nothing. I continued to hold his hand and talk to him, not knowing if he could hear me.
I still talk to him, and sometimes his words come to me in response. “Are you really answering me, or am I making this up?” I asked him. He replied, “It doesn’t matter.”

What does matter, at this point in my life, is that I’m taking with me the best of what Robert and I shared. That’s what he’d want for me, and what I want for myself. I find joy in my writing, in dance, in close friends, in physical and mental exercise, in learning, and yes, in my memories of Robert.

I hold my coffee cup to my cheek. It’s just the right temperature.