Just when society is starting to accept that seniors are having — and enjoying! — sex, some of the most outspoken, sex-positive, seasoned women among us are not having sex. Some are choosing celibacy for now, some have fallen into it. Can we still be sex educators, sex writers, and sex activists if our orgasms are solo and we sleep with our pets? Yes!

At age 59, Candida says she’s not in a hurry to find a new partner, but “I am committed to having a date with myself at least once a week to exercise my PC muscle, which runs along the pelvic floor and surrounds the entire vagina. Then I reward myself with a nice little session of self-pleasuring.”

Erica Manfred, divorced at sixty, is the author of He’s History You’re Not: Surviving Divorce After Forty. Erica contributed helpful tips to Naked at Our Age for getting through the devastating emotion- and ego-slamming period of a later-life divorce.

In a recent Huffington Post article, Erica writes that at age 68, she has decided to give up on dating and sex. “It takes a hell of a lot of energy to date at my age,” the former sexual enthusiast writes. She’s not closing off the possibility of “getting my mojo back” in case Mr. Senior Right shows up at the supermarket, but she’s abandoning the online dating sites and cuddling her chihuahua.

Rachel Kramer Bussel is, at 35, the youngest of our sex-positive celibates. Rachel is an erotica author, sex columnist, and editor of 38 anthologies, including my favorite series: Best Sex Writing 2008, 2009 and 2010.

In an article she wrote for SexIs Magazine, Rachel revealed that she’s abstaining from sex and dating until her 36th birthday. (Note that the”sex” she is giving up is “physical, genital contact with another person,” leaving her free to indulge in phone sex and cybersex — fair enough.) She made this choice so that she could examine her “relationship errors” and “inappropriate attachments” and not go chasing immediately after the next hot encounter.

Is it hard to write about sex all day and not go after it at night? “Am I missing out on what’s supposed to be my sexual peak?” Rachel wonders. “Maybe friends with benefits is the best life can offer me and I’m being foolish or stupid to hold out for something more fulfilling. Or maybe I’ll find that I like being on my own so much I don’t ever want to actually join forces with someone else.”

I’ve divulged my own celibacy since losing Robert — on this blog in a shy way, and with more candor in Naked at Our Age (you’ll see!). I’ve started to date again, which so far means a series of sexless first dates. I’ve had some excitement (again, you’ll have to wait for Naked at Our Age!) but without the culmination of inviting a partner into my body.

Senior sex is still my intellectual, emotional, and career passion. My mission to normalize later-life sexuality in the eyes of society is as important to me now as when Robert and I were curling each other’s toes. I know I’m getting somewhere when seniors are seen as oddities when they’re not having sex!

As always, I welcome your comments! 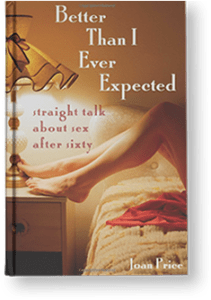