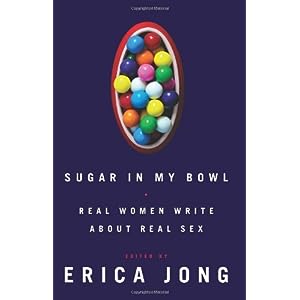 Oh, my goodness – I started reading Sugar in My Bowl and I couldn’t stop. I loved this book.

Sugar in My Bowl: : Real Women Write About Real Sex, edited by. Erica Jong, is a remarkable anthology of personal essays and a few short stories, all with the theme of what women think about sex and how they remember and think back on pivotal sexual experiences.

As older women, we’re often ignored and made to feel invisible, especially our sexuality. I love it when books celebrate us, take us seriously, and convey our true experiences and attitudes.

That’s what happens in this anthology. At least half of the writers are age 50+. You can tell from some of the photos and dates or era references in their essays. Some of the younger writers talk about their parents, so we get plenty of sex after midlife in this book.

In “Peekaboo I See You,” Anne Roiphe describes playing doctor with a pal at age 5, while World War II was part of the adult world. “Jimmy puts his hand on my wee wee and he leans down to examine it carefully.” Later they reverse roles, and she wonders, “What do you do with those things below your penis?” “Nothing, he says, “they’re just there for decoration.” Of course they get caught. We always got caught.

In “Worst Sex,” Gail Collins, who came of age in the early 1960s, writes about her religious upbringing, when even starting to get aroused was a sin: “My friends and I were part of the last batch of American women to spend their adolescence being constantly lectured about sex by women who had never had any.”

In “Sex with a Stranger,” Susan Cheever heard the same warnings as I did growing up in the 1950s: “They won’t buy the cow if they get the milk for free.” That didn’t stop her from picking up men at parties. “The real danger of a one-night stand [isn’t that] it will lead to nothing, but that it will lead to everything…Those who are not ready to have their life changed should probably abstain.”

In “Going All the Way,” Liz Smith writes about losing her virginity to her first cousin at 16 in 1939 in an “A plus” experience. “I don’t remember if I had an orgasm,” she writes, “I was so ecstatically having ‘something’ special happen that I didn’t know if I was missing something else.”

In “Herman and Margot,” a short story about an 87-year-old woman and a 92-year-old man, Karen Abbott writes, “In the beginning they take things slowly, reveling in the irony of teasing time when they have so little of it left.”

Sometimes the sex is good, often it’s unsatisfying, bewildering, even “labia-shrivelling” (Jann Turner). It’s always fascinating, the kinds of conversations we wish we could have with other women, but brilliantly written by top-notch writers.

I kept noticing that the older women’s essays had the coloring of decades-later perspective, and this was often the take-home message of the essay. We women not only enjoy having sex — we also contemplate it afterwards as well as before! Even when the experience is less than fulfilling — and many of them are! — we learn from them and struggle to make better choices next time.

Jong writes that Anais Nin told her in 1971, “Women who write about sex are never taken seriously as writers.”

“But that’s why we must do it, Miss Nin,” Jong countered. I agree!

Thank you, Erica Jong and all the writers in this anthology for taking on this mission with such purpose and craft. Exceptional book, highly recommended.

Sugar in My Bowl (the title is from a Bessie Smith blues song) has its own website here.