“Where are the reviews of sex toys for men?” you keep asking me.
My books and blog are not just for women – I’m happy that I have many
male readers, and I’m thrilled when men as well as women fill the room at my
talks and workshops. But how do I, a woman, review a sex toy for men?
Obviously, I do that by inviting a smart, articulate, candid,
sex-positive man of our age to review it – a man like David Pittle.
I first met David when he attended one of my talks and introduced
himself as a therapist in San Rafael, CA, saying that he has been buying copies
of Naked at Our Age for his clients. Since then, he has attended several of my
events, and we’ve had many lively and honest conversations about sex and aging.
When he told me that the Hitachi Magic Wand is his favorite sex toy, I invited
him to write a review from his male perspective. Lucky for us, he was happy to
oblige. Here it is:
The Hitachi Magic Wand
reviewed by David M. Pittle, Ph.D.
Most sex toys are designed for either women or men. However, one wonderful item
which is bisexual is the magnificent and venerable Hitachi Magic Wand. 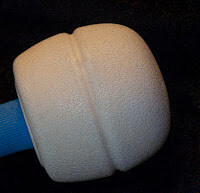 The Magic Wand is
large, about 12.5 inches in length. It resembles nothing so much as an old World
War I potato masher hand grenade. Like a hand grenade, when it goes off, it
provides a very big bang. The business end is 2.25 inches across, with a
shallow v-slot that will hold your penis even in its flaccid state, and keeps
it captured as you get hard. With two different speeds—L(ow) provides a
relatively gentle ride and H(igh) gives a powerful, “let’s get going now” experience—the
Magic Wand handles all the needs for most men.
Doctors sometimes
recommend the Magic Wand, ostensibly for massaging back and shoulder muscles.
But that size makes it perfect for massaging a man’s testicles and perineum,
the area between the anus and the testicles, an area which is very erotically
sensitive.
Another nice feature
is that the head is easy to clean, as every sex toy should be, though not
immersible and not for use in the tub or shower. The Magic Wand is corded and
must be plugged into a wall socket. It is perfectly safe electrically when used
in bed or other dry environments, but obviously one would not use it in the
water any more than a hair dryer.
One accessory that
may be useful to some men, though I haven’t felt the need for it, is a variable
speed controller.  It can slow down the
Magic Wand, if even the Low speed is too much, but I notice that reviews are generally
not positive. If it isn’t needed, save the money and get a vibrator that is
less intense.
I’ve tried a few of
the sex toys specifically designed for men, but I always come back to my MagicWand!
David M. Pittle, Ph.D., is a therapist in San Rafael, CA, who has been helping people with sexual issues for over thirty years. Many of
his clients are age 50-80, when good sex is important, and dissatisfaction may
lead to loss of shared intimacy that can threaten the total relationship. David
specializes in helping women who are not experiencing sexual satisfaction and
men with non-medical and medically-related erectile dysfunction or other
issues. Visit his website here.
(I am sad to tell you that my friend, sex therapist David Pittle died December 2017. We value his sex toy reviews. Read his other reviews here.)
Read Joan’s review of the Magic Wand for women. You’ll also find references to the Magic Wand in reviews of many other sex toys, because the Magic Wand’s intensity is the gold standard!