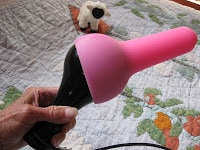 When “Dr. X. Treme” offered to send me the X1 Orgasmatron for review, I jumped at the chance.It’s a funny looking contraption — one of my Naked at Our Age Facebook followers asked if I got it from Woody Allen when I posted a photo. 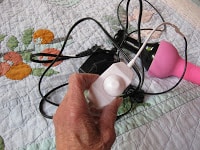 Yes, three cords, total. Once you’re all plugged in, so to speak, you dial up the intensity you want, and supposedly get a physics-law abiding orgasm.  According to the inventor’s website, http://www.doctorxtreme.com:

I’m sorry, I really wanted to like the X1 Orgasmatron. But it didn’t work that way for me. If my clitoris was an “iceberg,” the X1 Orgasmatron was a giant jackhammer battering away at it–and at my hand which was trying to hold it.

So that’s what I tried to do. 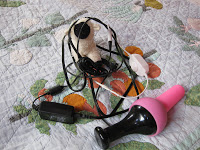 Unfortunately, it was uncomfortable to hold, the “fingertip” was very hard (consider a softer, slightly squishy attachment, Dr. X.), and the combination of the noise, the silliness of having three cords to contend with, and needing to use both hands just to keep it from escaping as it clattered about made the experience too unsexy to continue.

Yes, I tried dialing down the intensity, but then it was just one more toy that didn’t deliver. I wanted the intensity — but not in the style of a silicone jackhammer.

Did you notice that the slogan of XTreme Orgasmatronics is “Less pants, more science.” What did you make of that? I had to ask Dr. X. Treme, “I don’t understand ‘less pants’ – do you mean fewer trousers, or less heavy breathing?”

He replied, “The idea of the tag line is that when one applies physics to sex toy design it’s still real science but trousers are no longer needed in order to go to work.” Oh…. May I respectfully suggest that Dr. X. rethink this tag line? One more thing to rethink: the X1 Orgasmatron retails for $180.

If a sex toy doesn’t work for me, I try to figure out who would like it. After all, I’m just one person with particular tastes, and just because I’m ready to pull out all three cords doesn’t mean you won’t love it. If my jackhammer analogy made you squirm with delight rather than recoil, you’d probably have fun with this. Whether you’d have $180 worth of fun, I can’t say. 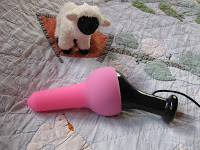