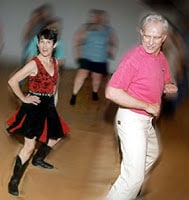 Tomorrow, December 11, is the 12-year anniversary of the day that I met
Robert Rice and my life — personal and professional — flipped itself
upside down. Robert walked into the line dance class I was teaching, and I tried to remember to breathe.

It was lust at first sight… on my part. He, I learned later, was just looking for a new place to dance.

I didn’t know that night that I’d fall in love with this man. I only knew that his blue eyes and warm smile melted my world, and I had a sudden urge (which I resisted) to touch the chest hair that peeked from the V of his shirt. When he started to roll his hips, revealing a lifetime of dance and a self-assurance in his 64-year-old dancer’s body, I felt my own hips strain to match his rhythm.  I kept forgetting the steps to the dance I was teaching.

It took nine months before I finally caressed that chest hair and our hips matched rhythm horizontally instead of vertically. I, whose motto had been “the only problem with instant gratification is that it takes too long,” pursued a man who didn’t believe in rushing anything. (Our complete story is in my first book about senior sex: Better Than I Ever Expected: Straight Talk about Sex After Sixty.)

Our first kiss didn’t happen for nine months — but once we started, we never stopped kissing.

I lost Robert to cancer on August 2, 2008 — exactly seven years after our first kiss.

Today, I made myself coffee in the coffee pot that he had used, held my cup to my cheek as he had done. I thought of the post I had written in 2010  — “I’m Going to Make You Coffee….” 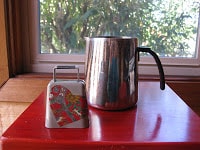 I thought first that I would republish that post today. But another two-plus years have passed since I wrote that. As strong as the memories are still, and as freely as the tears flow at those memories, my grief has more layers of time cushioning it. The grief isn’t so raw and I’m not powerless or joyless from it. It still floods over me, but not all the time, and when it does, I know how to swim to the top and breathe again. My muscles are strong from practice.

For those of you who have lost a loved one, I think it’s important to share this with you: It does get easier. We all proceed in our own time frame. There’s no “right” amount of time to grieve, and anyone who tells you, “you should be over it by now” should be educated (first I wrote “pilloried,” but I changed my mind). 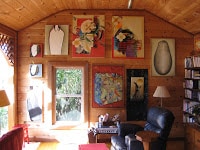 I’ve also learned that we can move forward and hold onto the memories at the same time. I’m listed with three online dating sites, and I’m enthusiastic about welcoming male company into my life. I still miss Robert every day. I am not looking to replace him — couldn’t be done even if I wanted to, and I don’t want to. Any new man I get involved with will have to accept that I’m not going to take Robert’s paintings off the wall or hide the urn that holds his ashes.

I’m 69 — I bring my whole lifetime of experiences with me into whatever path I take next. That includes my memories of the man who taught me how richly I could love and be loved.