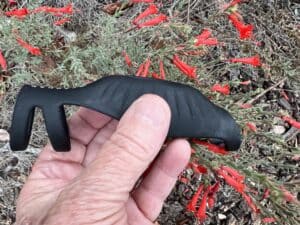 Think of the Rocketeer Vibrating Penis Enhancer Sheath as a “booster rocket” for self-pleasuring. When I saw ads for it, I was eager to try it out. Rocketeer is an innovative sheath that wraps partially around and sits atop your erect penis. It attaches to your member and around your scrotum via three stretchy loops. The nine-speed motor is easy to turn on and off. Rocketeer is waterproof, relatively quiet, made of silicone, and recharges easily through a USB cable provided. It is a unique new design. What’s not to like? 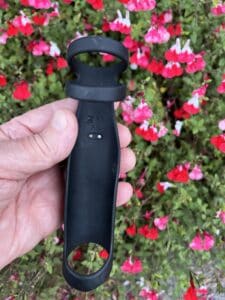 I was very excited when the Rocketeer made by Gender X arrived from Betty’s Toy Box. I charged it, cleaned it thoroughly, and prepared to take it for a ride. But it didn’t fit me properly. Only two rings of the potential “three ring circus” this toy promises attached to me. The one that stretched around my scrotum went on easily and comfortably, as did the one that looped around the base of my penis. But the ring meant to encircle my erect penis head flopped forlornly nearly an inch too far away. Imagine my frustration!

The packaging for Rocketeer mentions that it is 6.06 inches long. But I didn’t expect that it would only fit those with erections of that length or greater. Alfred Kinsey was a pioneer in sexuality research who made many important contributions. Unfortunately, one of those, published in the 1960s, was based upon highly problematic data: self-reports from men who measured their own erect penises. From that flawed information Kinsey and colleagues concluded that average erect penis size was over 6 inches. Evidently, Rocketeer’s designers relied upon this outdated information. In the half century since Kinsey’s work, many more careful studies of erect penis length have been done. These use measurements taken by health professionals rather than provided from self reports. The resultant more accurate data show that human erect penis length forms a statistically normal distribution: the average is between 5.1 and 5.5 inches. The range between 4.5 inches and 5.8 inches covers 68 percent of the men measured, and from 3.9 inches to 6.3 inches covers 95 percent of the variance.

An erection measuring 6 inches lies in the top 15 percent for penis length, and an erect penis of 6.3 inches is in the 95th percentile, which means only 5 out of every 100 exceed that length. These data highlight Rocketeer’s major problem: the toy has been constructed to fit an erect penis of 6.06 inches or more. That design miscalculation means that it will not properly fit the great majority of its potential customers! 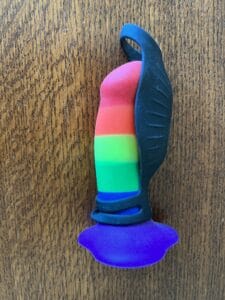 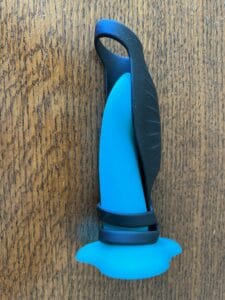 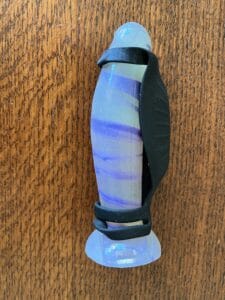 Given my frustration, I tried a work-around to see if I could experience at least some of the sensations the toy might offer. I doubled the penis head ring back on itself and placed it onto my member so that, bunched up, it remained briefly in place. I then pulled a condom over this bundle. That snugged it enough so I could start the motor and receive at least a modicum of the motor’s patterns.

While these felt good in a low-level sort of way, I felt cheated. And I’m afraid this toy will disappoint any owner of an erect penis measuring less than 6.06 inches in length. I can’t speak for those who measure more. While the basic plan of Rocketeer is a good one, unless Gender X remakes it in a length that will fit more than a mere 15 percent of their intended market, I’m afraid their rocket has misfired.

If your erection length is right for the Rocketeer, watch Carolyn’s upbeat video about ways you can use it for solo and partner fun, including during intercourse. Although Rocketeer Vibrating Penis Enhancer Sheath didn’t work for me, I wish to emphasize that Betty’s Toy Box is a great source of excellent products. I encourage you to visit their site. Use this link and the coupon code JOAN10 for a 10% discount off any purchase.

—Shamus MacDuff, age 79, was oblivious to the delights of sex toys for penises until about 5 years ago. He’s been making up for lost time! Read his other posts here.