I love this article by lifestyle columnist Ann Marie McQueen in the Ottawa Sun today!

After I suggest to California author Joan Price she seems to have landed the world’s greatest sixtysomething man — scratch that, the greatest man of any age — she launches right into the nitty-gritty.

They’re out there, says the author of Better Than I Expected:Straight Talk About Sex After Sixty, who is coming to Ottawa this weekend to give two workshops on the topic at downtown sex shop Venus Envy.

The men she speaks of, like her Robert, came of age in the 1960s too, and many of them want to be with their female contemporaries, want to find ways to make sex good with them, no matter what their aging bodies say about it, says Price.

She gathers steam as she describes such men, who will listen as women say things like, “let’s see what we can do about my thinning vaginal tissues, about my lack of lubrication.”

“This may be too frank for you.”

“No, no,”I say, realizing I had starting chuckling out loud right about the time Price said “thinning vaginal tissues.”

If you are below 50, and before you start going ‘ewwww’ at the priceless Price, it might be time to think about where your own life is headed. That’s right. Straight to 60, and beyond. Might be time to pay attention. And ditch the attitude, such as the kind embodied in Louise Rafkin’s article for the San Francisco Chronicle magazine, headlined “Now that Baby Boomers have discovered there’s sex after 60, could they please stop writing about it?”

It’s not very likely Price is going to do anything of the kind. In fact, she’s made it her mission to speak on it as much, and as frankly, as possible.

While the one-time English teacher, fitness professional and author was penning Better, Gail Sheehy would be building on the success of her book Passages 30 years ago with Sex and the Seasoned Woman, which was all over the morning TV shows, Internet and newspapers when it came out in January.

“It has never portrayed the older woman as sexy, understanding herself, self-confident, self-knowledgeable, self-affirming and that that’s a good thing,” says the California-based Price.
If women are shown as sexual when they are older, it’s either perceived as ground-breaking (Diane Keaton in Something’s Gotta Give) or predatory and pathetic (a turn by actress Holland Taylor on Boston Legal’s predecessor The Practice). They are invisible in magazines, says Price, who is determined to build on the current wave of awareness.

“I want it to seem normal for one,” she says, “and I want people who have not come out of the woodwork to talk about it, and they are.”

She’s even delighting in holding her Straight Talk About Sex After Sixty workshops in new-generation adult stores like Venus Envy. Drawing people who’ve never visited them, helping them realize the sex-related treasures they hold, is another of Price’s goals.

“They are places filled with joy and laughter, and the attitude that sensuality and sexuality are great pleasures for us,” she said. “And they are just showing us ways we can enhance those pleasures.”

In an article titled “Check the Expiry Date” in the Ottawa Xpress, Sylvie Hill wrote about Better Than I Ever Expected:

I always wanted a book of nude photographs of older ladies to help me grow accustomed to what I’ll become. I haven’t found that book, but I have checked out Joan Price’s Better Than I Ever Expected: Straight Talk About Sex After Sixty (Seal Press, 2006). Price is priceless… As a collection of testimonials about sex from gay, straight, married and single 60-plussers, the book’ll whip your skull over yonder toward the future, and alert you to some sizzling possibilities!

Tagged interview with Joan Price, media, review of Better Than I Ever Expected, senior sex aging
Leave a comment

Toni Goldfarb, medical writer and co-author of the American Lung Association’s 7 Steps to a Smoke-Free Life, wrote such a stirring customer review of my book on Amazon.com that I asked her permission to reprint it here. Thank you, Toni!

Encouraging advice, and a great love story, too

If you’re trying to decide which of the new “sex over 60” books to buy, definitely choose this one. It is not a step-by-step “how to” book that might offend people, although it does cover every aspect of sexual activity–married, single, solo, gay, straight, young, old, one-night, long-term (50 years and even longer). Instead, the book provides practical, encouraging advice from experts and from ordinary women about the joys of loving relationships, dealing with sexual problems of menopause, loss of interest in sex (or your partner’s loss of interest and/or ability), how to approach sex with a new partner, helpful exercises, and even a detailed discussion of sex toys and assistive devices. (I thought these were only for “adventurous” couples, but the book explains how they can make sex possible and more enjoyable for older people).

Plus, this book is also a beautiful love story which could stand on its own, even without all the excellent sex information. The writer chronicles her many relationships, from her first teenage romance (You’ll be furious to learn how her father broke up what might have been a lasting relationship), to a succession of sexual affairs, including a short failed marriage. It’s easy to see why she had given up on finding true love. But she never gave up on having an active, fulfilling life as a dance and exercise instructor, despite two devastating auto accidents that left her with many scars and lasting injuries. And then, magic! In the form of a trim, gray-haired, older man she spots in one of her dance classes. These are true-to-life 60-plus people, not wrinkle-free, gorgeous-body super models, but the story of how their love and sexual relationship blossomed is a real page turner. And be prepared for a few tears when you come to a troubling revelation near the end of the story.

This is a thought-provoking, informative, encouraging book you’ll definitely want to share with friends.

Tagged review of Better Than I Ever Expected, senior sex aging
1 Comment

I was interviewed about love in later life by Jill Kramer for the Pacific Sun (Marin County, CA), Feb. 10, 2006, under the title “Tips for Older Lovers“:

I think later-life love is the best. We come to each other with decades of adult life experience, including many relationships that may have helped us grow to the next stage when that person doesn’t fit any more — so then we’re ready for someone who can match us at that next level of growth. So I think it’s natural for us to grow into and grow out of relationships until we get to the point where we really know who we are and what we’re looking for and what we have to give.

It’s harder when you’re older to find the right person. And it’s hard to hold out for someone who’s got everything you’re looking for. So sometimes people get into relationships that are only partially fulfilling because they figure, “Well, I’m not going to do any better.” Yeah, you are! Don’t settle! Do the things you love to do and look around at who else is doing them. Be yourself, don’t put on any kind of an act. Be the person you hope to find. 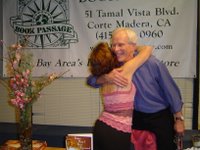 Tagged dating at our age, interview with Joan Price, love, media, review of Better Than I Ever Expected, senior sex aging, seniors dating
Leave a comment