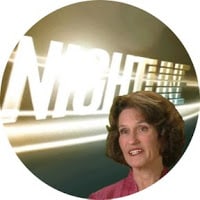 On Friday, Dec. 1, ABC Nightline aired the segment on senior dating and sex, including an interview with me and a bit of my love story with Robert.

I had no idea how Nightline’s hours of interview time would translate to a couple of minutes of air time. I knew the emphasis of the show would be on seniors’ risky sexual behavior, and I hoped there would also be room for the joy and intimacy of senior sexuality.

ABC did a great job putting this show together and — yes — conveying not only the cautions that our age group needs to be aware of, but also the joy and exuberance — as well as the challenges — of being fully alive in aging bodies.

I was thrilled when I saw it. Having watched it five times now, though, it’s a little embarrassing that so much focus was on how creaky our aging bodies become! I liked that the creaky talk was juxtaposed with the energetic and not-the-least-bit-creaky line dance visuals – that was cool. (And it’s amusing that I’m receiving emails from people recommending specific mattresses and arthritis remedies to combat the creakiness!)

One thing I didn’t mention in my background story in the post below: We had some laughs before the taping, when I asked what language was acceptable and what wasn’t. I knew I’d be reading aloud from reader comments on my blog, and I’m used to speaking frankly. Respectfully, but frankly.

We all laughed together as we went over words: “erection” was OK, “hard” wasn’t. When they told me that “clitoris” was okay, I reduced the crew to hysterics when I proclaimed, “Great! I’ve always wanted to say ‘clitoris’ on national TV!” But …it turns out I didn’t!

Did you see the show? What did you think?