7/19/21 update. I just replenished my supply of Ageless Erotica — I had sold out yet again! — and thought you would enjoy this hilarious review by humorist Roz Warren from March 2013. Yes, Ageless Erotica is still available, from my website (autographed and shipped immediately!) or Amazon, or you can ask your local bookseller to order it.  It makes a great gift for yourself or another sexy senior. — Joan

“He Wants Me Naked When I Fling the Front Door Open”

The stories in Ageless Erotica are a fascinating mix of the sensual, the medical and the humorous. The writing itself is all over the place. Laughingly abysmal. Unabashedly smutty. And, often, oddly moving.

Here’s a sampling of my favorite lines:

Intrigued? You can find Ageless Erotica on Joan’s website or at your local indy bookstore. If it’s not in stock, just give the salesperson a lascivious wink and ask him to order it for you. And Ethel. 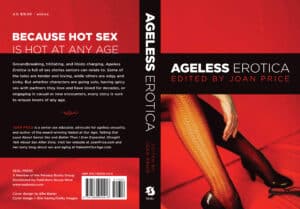 Roz Warren writes for The New York Times and The Funny Times. Her work
also appears in Good Housekeeping, The Christian Science Monitor and The
Philadelphia Inquirer. Visit her website.

This review (c) Roz Warren first appeared at HumorTimes.com on March 30, 2013. It is reprinted here with Ms. Warren’s permission.