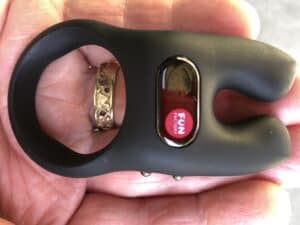 The NŌS is an outstanding new vibrating cock ring from Fun Factory. I have enjoyed it immensely during solo sex. Stretching the ring over a flaccid penis, NŌS quickly brings an erection when the motor is turned on. Moving it to different positions on the shaft yields various pleasing sensations.

My own favorite position is to point the motorized ends downward and inward so that they contact my scrotum. Revving up the power then produces wonderful vibrations all over my genitals. Rub a dab of water-based lube on the frenulum, and an orgasm will soon follow.

Generally, the controls on the center button work well. However, they are somewhat difficult to operate with lubed fingers. The solution is to start NŌS before slipping it onto your penis and before using lube. It’s then easier to change the settings with or without lube on one’s fingers.

The name NŌS derives from the Latin for “we/ours.” It also means “us” in Spanish and Portuguese. This name was chosen specifically to indicate that—in Fun Factory’s marketing lingo—it is “a cock ring for both of you.” “Both of you” clearly refers to a heterosexual couple who wish to “come together” and orgasm simultaneously during penis-in-vagina 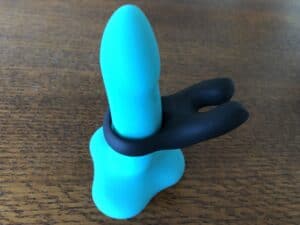 NŌS is designed to facilitate this “coming together.” It fits around the penis and at the same time can hug the partner’s clitoris with its vibrating pincher-like tips. The expectation is that a couple can sync their orgasms. Fun Factory claims that “you’ll climax together harder than ever.”

To their credit, Fun Factory mentions several ways to use NŌS other than trying to produce orgasms for two people at the same time, such as wearing it on your hand as a finger vibe for your partner.

NŌS is — as Fun Factory hopes — also effective in partner sex, although not necessarily in the way they emphasize. In what my vulva owning partner and I affectionately call “old people sex,” we seldom engage in PIV, far preferring lots of stroking and oral and manual play. Two ways that we enjoy using it on me:

NŌS is a great addition to anyone’s sex toy collection. Don’t expect it to magically provide the rare simultaneous orgasm. But do recognize it as an effective, versatile little sex toy. Some of its many qualities:

I heartily recommend Fun Factory’s NŌS. You’ll be happy to own one! 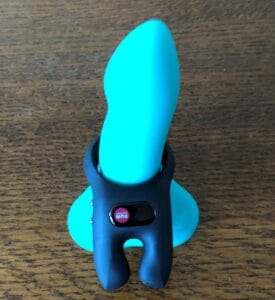 Caution: Cock rings are safe when used properly. Wear for no longer than 20 minutes at a time. If it hurts, remove it. Do not use if you have a blood/bleeding condition.