REVIEW OF ATOM PLUS

Atom Plus by Hot Octopuss is an innovative new cock ring that engages the scrotum as well as the penis. Wearing it requires some practice, some effort, and plenty of lube, but once in place the end result is extremely pleasant. 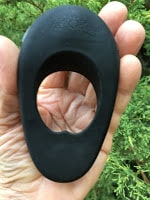 What sets Atom Plus apart from other cock rings is its direct stimulation of the perineum as well as the penile shaft, creating powerful sensations and more intense orgasms.

The diagram below from Hot Octopuss makes it appear easy to drop one’s balls through the opening, rotate the device 90 degrees, and then slide the soft penis through to reach “operating position.”

However, I found that it took considerable work at first to stretch the Atom Plus’s opening sufficiently to get both of my testicles through. After manual stretching alone proved insufficient, I hooked Atom Plus up to a fixed vise handle in my workshop and pulled very strongly against it. That workshop action stretched the opening enough so the “getting-it-on mission” eventually was accomplished, with copious application of water-based lube to my balls and to Atom Plus itself. The more I have used Atom Plus, the easier it has become to get everything in position.

Atom Plus has five different settings, and you’re sure to find one or more that flicks your bic. For me, the second and third settings are dynamite. The second setting gets my penis erect almost instantly with its steady pulsations, while the third setting brings me into P-spot heaven. Try ‘em, you’ll like ‘em!

Although it has two separate motors the Atom Plus is remarkably quiet, emitting only soft, gentle sounds. It is made of silicone and is totally waterproof, so it can be used in the shower and is easy to clean. It charges quickly and holds a charge for a long time. However, the barely raised control buttons are not highly responsive to touch with lubed fingers, and one has to feel around a bit before being able to change settings. 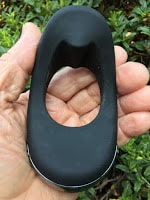 My female partner and I experimented with Atom Plus in missionary position PIV (penis-in-vagina) sex, but she did not love it. Aligning the small nub on the front of Atom Plus with her clitoris was difficult, and by her report, my gentle thrusting felt like a battering ram because of the hard surface of the Atom Plus.

We tried several different insertion styles (gentle circular motions; partial penis insertion without Atom Plus directly contacting her; extremely slow in-and-out action) but none of these delighted her. She said that she did feel the vibrations produced by Atom Plus, however, and we giggled over her “vibrating vagina.”

While some may find it nice for PIV, Atom Plus works best for me for solo sex, and for that it is a wonderful addition, a definite delight, and highly recommended! 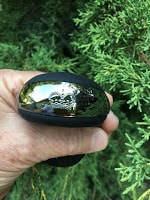 Shamus MacDuff, age 74, was oblivious to the delights of sex toys for penises until about a year ago. He’s making up for lost time! Read his other posts here.