Note from Joan: Shamus MacDuff is the pseudonym of a 75-year-old retired university professor and author. Other than his name, he promises that everything he says about himself is true. His first guest post, “Great Sex Without Penetration: A Man’s View,” attracted so many readers and such positive response that when he offers additional posts, I quickly agree. 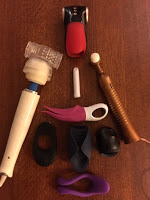 While a few vibrators are targeted specifically to provide stimulus and response to penises, a great many more kinds of sex toys exist. Most of these are designed especially (but not exclusively!) for clitorises and vaginas. It’s time to examine what these toys have to offer to penis owners, and to help guys like the fellow at my gym break out of the “penile colony” and begin to enjoy the myriad pleasures of a variety of sex toys.

That conversation I overheard at my gym saddens me, because the speaker was clearly a prisoner of “the penile colony”—a believer that the only real sex is penis-in-vagina (PIV), with an unfortunate primary focus on his own pleasure rather than on increasing hers. Vibrators offer fun and innovative ways to break out of that unhappy mental prison, allowing us guys to recognize and experience the full panoply of delights that sex toys can provide to penises as well as clitorises. Give ‘em a try—you won’t be disappointed! 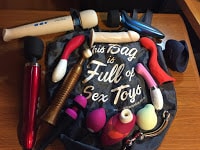