We’re all reading and talking about gay marriage / marriage equality this week. I’d like to invite our LGBT Boomers, seniors, and elders to comment here about their lives growing up without acceptance or equality.

In high school, I had a guy friend who, I learned 50 years later, was gay. How much it would have accelerated my own education and evolution if he had felt he could talk to me about that then. But he didn’t. Maybe he felt he couldn’t. Maybe he thought it was none of my business. Maybe he wasn’t sure. He dated girls at that time.

Fifty years later, when we met again, I asked if he was married. He told me nonchalantly that he was in a decades-long relationship with a man. He said he wasn’t hiding it — he just informed people who asked. 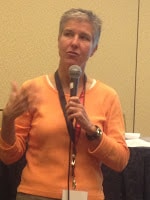 At CatalystCon East this month, I attended Terri Clark’s session, “The Silver Rainbow: Working with LGBT Seniors.” There are more than 1.5 million LGBT older adults in US today, and by 2030,
they’ll number more than 3 million, Terri told us. She is co-chair of The LGBT Elder Initiative
(LGBTEI), which is “committed to assuring that lesbian, gay, bisexual
and transgender older adults have rights and opportunities to live
vibrant, creative and mutually supportive lives.”
“The LGBT community is very youth-focused,” Terri said. “Once you get older,
you cease to exist.”

I thought I was well-informed, but this session made my jaw drop, especially when Terri showed a short film from Project Visibility (trailer below). In it, people talked about their need to be closeted growing up. “We always kind of lived a lie,” they said. “That was your life and you’re not able to share it. Your story would be missing.”

Even decades later, they lost jobs, family, and their faith community when they came out. One college professor was told, “We don’t have room on the faculty for you any more.”

Many LGBT seniors are still closeted today. This makes them afraid to access senior health and legal services that the rest of us take for granted. 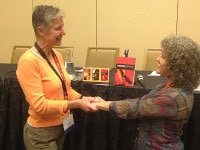 Yes, marriage equality is important. But that’s not the only chapter in this story. Gay or straight, young or old, religious or not, activist or not, we need to come together, stand up tall, and speak out loud for equality for all of us, in all aspects of our lives.

In the words of one of the interviewees, “It’s who we are. It’s not a moral issue.”

Dear John, I Love Jane — isn’t the title perfect? — is a 2011 anthology edited by Candace Walsh and Laura André (who happen to be a couple) and written by women who left their straight life/ relationships/ husbands because they fell in love with women.

Some always knew they were attracted to women, but bowed to society’s norm and married men anyway. Others had no idea they could or would fall in love with a woman.

The stories are engrossing, well-crafted, intimate, and dramatic. I felt I was sitting in a room hearing these women’s personal stories — their conflicts, thrills, misgivings (sometimes), and declarations.

When Seal Press offered me this book to review, I emailed back, “I hope some of the stories highlight women over 50.” I was surprised and pleased to learn that several of these authors are over 50, and in case you want to read their stories first–as I did–here are their names: Leigh Stuart, Sheila Smith, Susan Grier, Meredith Maran, Kami Day, Micki Grimland, and Katherine Briccetti.

I loved many of the stories, including “Memoirs of a Wanton Prude” by Sheila Smith, who first fell in love with a woman at age 69. As a teen, she was taught that gays and lesbians were “Sick! Immoral! Perverted!” and she fought back her feelings until age 50. Still, she stayed with her husband, “reading lesbian books and [keeping] my feelings about women under wraps. A divorce and a few years of solitude readied her to meet Diana, who taught her that “Lesbians are about intimacy”: “It wasn’t so much she wanted to go to bed with me; it was that she wanted to wake up with me.”

One of the most moving stories to me was “The Right Fit” by Kami Day (also over 50), who was raised Mormon and was taught that “Heavenly Father had made one man whose penis would fit just perfectly inside my vagina,” and that perfect fit would be revealed on her wedding night. It wasn’t. But 15 years later, the perfect fit arrived: Michele. And 15 after that, they are still together, “using only about half the mattress in our double bed.”

The writing is terrific — often lyrical, sometimes funny, and full of surprises. For example:

Dear John, I Love Jane is an important book. It is more than a lesbian anthology — it’s about women making choices at first that go counter to what they really want or need (and isn’t that especially true of our age group?), then facing and accepting — and being thrilled by! — their true natures. It shows women’s sexual fluidity in a way we seldom see or acknowledge.

When I was writing Naked at Our Age, several women over 50 sent me their stories about marrying men (some quite contently, others battling their nature) and in later life discovering love with another woman — or wanting to experience sex with another woman and not yet putting it into action. If this book had been out then, I would have recommended it. I recommend it now!

Purchase the Dear John, I Love Jane on Amazon or order from your independent bookseller.

“Can I vote on your marriage?”
“Straight but not narrow”
“Give love a chance”
“Please let my Dads stay married”
“Marriage is defined by commitment, not genitalia”

These were a few of the signs carried by almost 2,000 people who marched yesterday in Santa Rosa, CA, part of an effort around the country to protest California’s passage of Proposition 8 banning gay marriage. Our own Sonoma County voted 66% against the proposition, but the state as a whole passed it.

Why was I there? I am committed to the belief that we should all be equal under the law — which seems so obvious that I am horrified, mystified, and embarrassed that Prop. 8 passed.

Beyond that, I had the profound and exhilarating experience of marrying— spiritually and legally — artist Robert Rice, the great love of my life. I know the depth, the joy, the emotional power of making that commitment.

Why deny the legal right to that same experience to committed couples who happen to be hardwired to love someone with the same genital configuration instead of the opposite?

I just don’t get it!

We marched yesterday, a rainbow of ages, colors, sexual orientations, united by one firm belief: equality under the law. Some walked nimbly, others were assisted by canes or crutches. Some pushed strollers, led dogs (often with their own signs or stickers), played instruments, or held hands. Many of the protesters were elders, I was happy to see, both gay and straight.

An amusing distraction was a man who carried a Bible and a sign that proclaimed, “God hates shrimp! (Leviticus)” In case you don’t know, the same book of the Old Testament that some people use to “prove” that God hates “sodomites” also includes this: “Whatsoever hath no fins nor scales in the waters, that shall be an abomination unto you.” In case you want to pursue this, visit the website devoted to this. (In case that makes you nervous, it’s a parody.)

I interviewed several elders about why they were there:

Liz Basile will be 81 next month. She left the Catholic church because of its positions on priest celibacy, abortion, and birth control. “I voted no on 8 because it’s just not fair,” she told me. “I’ve had two divorces – what did I do about the sanctity of marriage?”

“I think I’ll die still perplexed about why anyone cares what I do with my genitals,” Harley, a 68-year-old artist told me. Harley (who was a dear friend of Robert) is in a committed relationship with Hamlet Mateo, also an artist. “If I had waited for approval to be myself, I could never have lived my life.”

At a small group discussion afterwards, a grey-haired woman described the joy of being able to marry her partner of 15 years last October. Though she is dismayed that her marriage is no longer legally valid, she told us, “My marriage didn’t start last October, and it didn’t end on election day,”

I welcome comments on this and all my blog posts. If you’d like to comment but don’t know how, click here. It’s easy, really! If you have a website or a book related to the subject of this blog that you think we’d benefit from knowing about, feel free to include name and link. (No feeble excuses for blatent advertising, though, and no links to drugs or sites that I might consider questionable. If in doubt, ask me.)

Many thanks to Emily Evans for taking the photo above.