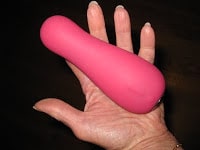 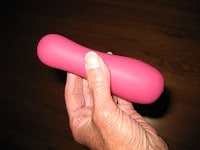 I love the velvety silicone — a matte finish that is smooth but with a little drag for friction. Use lube, of course — non-silicone is best for use with silicone toys. It has a little flexibility, making it easy to position and not have to crook an arthritic wrist uncomfortably. 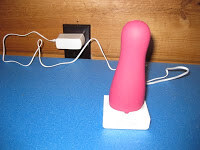 It charges by sitting in its charging seat. Once charged, it’s cord-free and battery-free. It’s completely waterproof — not just splash-proof, but immersible. Hence my shower foreplay.

I have to chide Jimmyjane for making the controls impossible to read unless you’re wearing reading glasses and standing in bright sunlight. Fortunately, once you’ve learned where the three controls are and what they do (“+” for more intense; “-” for less intense; a wavy squiggle for changing function), you can do it by feel. 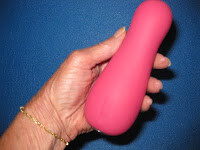 Be careful that the side with the controls is facing away from your body, or you might accidentally press a button with your thumb that changes the action at the wrong moment, and that’s a sad event indeed. 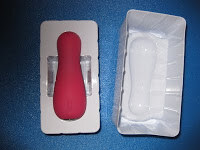 Thank you, Kama Sutra Closet, for bringing us together. Right now Kama Sutra Closet is offering the Jimmyjane Form 4 for $116 (regular price $145!). Put in the code Better15 for a 15% discount on any other, regularly priced item. 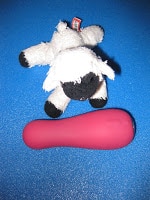