I was speaking at Copperfield’s Books in Sebastopol, CA, to a roomful of eager listeners, mostly our age. My favorite part is always the Q&A segment, which this time ran until the staffer announced that we had to stop because the store was closing.

Many of the questions were from singles about dating. For example:

After the audience disbanded, several people, mostly unpartnered, came up to me to ask more questions. But the store was closing, and we had to stop.

Afterwards, I realized I had missed a great opportunity. I should have invited the singles to join me at a restaurant next door for dessert and conversation. I should have organized a “Senior Singles Mixer.”

So that’s what I did at Book Passage in Corte Madera, CA, the following Saturday. It turned out to be more a discussion group than a “see if there’s someone here you want to date” event. We talked candidly about our personal dating experiences, hopes, apprehensions. We listened to each other with interest and compassion, and left understanding more about each other and ourselves.

I’m motivated now to announce a “Senior Singles Mixer/ Discussion” at the end of all my talks from now on, as long as the organizers agree. My next one is at the Center for Sex and Culture in San Francisco on August 18. (See more info about this and all my upcoming events here.)

If you’re not nearby, what would you like to discuss in a Single Seniors Mixer/ Discussion group? You can bring up topics right here. 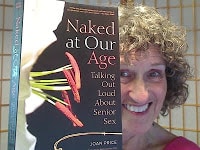