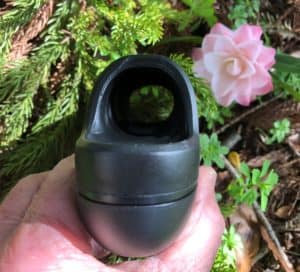 The Ion is innovative and unusual. It uses the same Pleasure Air Technology that the Womanizer pioneered for vulva owners, now re-engineered for the penis.

The lower half of the Ion contains the motor and controls, and the upper half is of soft silicone with a ribbed “tunnel” into which the penis is inserted. First, rub some water-based lube inside the tunnel and on your penis. Then situate your frenulum over a round hole in the base. Once the Ion is turned on, you will be also!

The three control buttons are easily accessible and increase or decrease intensity through eight levels. The sensations are so pleasurable and unusual that an orgasm rapidly results. While it works best with an erect penis, the Ion will also accept a flaccid one. 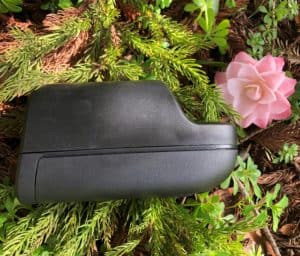 How Does It Work?

The Pleasure Air Technology sends pulsating airwaves to Pacinian pleasure receptors in the frenulum, producing sucking and massaging sensations that lead to powerful orgasms. Pacinian corpuscles in the frenulum are analogous to those in the clitoris. They are nerve endings in the skin that are highly sensitive to vibration and pressure.

That these corpuscles occur in the frenulum as well as the clitoris has led Arcwave to claim that the Ion produces “a female orgasm for men.” This strikes me as both odd and counterproductive. Odd because it is impossible for one gender to know what another gender’s orgasm feels like. It’s counterproductive because few penis owners—whether gay or straight—wish to experience a female orgasm. The quick, strong male orgasms that the Ion facilitates stand on their own and needn’t imitate female versions. To me, this strange marketing strategy seems to turn Freud’s infamous idea of penis envy on its head.

The Arcwave Ion adds a delightful and very interesting new experience for penis pleasuring. The Arcwave Ion joins an outstanding group of other penis toys, such as the Manta from Fun Factory and the JETT and Pulse (in several iterations) from Hot Octopuss.

Personally, I am very happy to have this new toy, and I predict you will be, too. It may just launch your level of pleasure into the ionosphere! 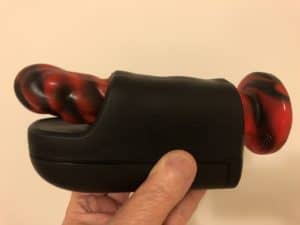 See the Ion in action

Thank you, Arcwave, for providing the Arcwave Ion in return for an honest review.