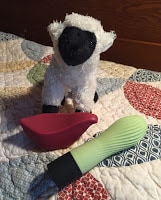 I wanted to love this because it’s so pretty and I love to squeeze soft, squishy objects. The vibrations, though, are only mild to moderately strong, despite 5 intensity levels and two pulse modes. For me, it’s a nice warm-up, but it doesn’t pack the punch I need to get more than pleasantly aroused.

A  problem led to frustration: although the control buttons are easy to use with dry fingers, I couldn’t seem to make the controls advance with lube-slick fingers. So if I started with level 2, I was stuck there unless I stopped the action, wiped my hands and the control buttons, and tried again. Buzz kill. The best solution I found was to turn it up all the way to intensity 5 before starting. (Don’t worry, the power won’t startle you the way an all-the-way-up Magic Wand would startle you — the vibrations are never blast-off strong.)

Although Iroha advertises the Iroha+ vibrators  as “redefining pleasure for women,” a testing assistant reported enjoying the curved shape vibrating over penis and testicles. If you have a partner with a penis, don’t be selfish — let the vibrating bird flutter over your partner’s erogenous zones, as well as your own.

Although this official video is absurdly delicate, you can see the  models and features here:

I reviewed earlier Iroha models: Iroha: Cutest Vibrators Ever and Iroha Mikazuki and Minamo: soft, slender, gentle vibrators, all from Good Vibrations. The new Iroha+ products, such as the Tori reviewed here, are stronger than the originals and completely waterproof.
Iroha Zen

At first I was baffled when I tried to figure out the battery placement with no “+” or “-” label to guide me. The instructions in the box were in Japanese. I foolishly didn’t peruse the website for help until after I tried to insert the batteries by squinting at the minuscule diagram, and it took me three tries. Not my proudest moment. You don’t have to go through that. Fortunately, the Iroha website has the manual in English as well as FAQ in English.
Using the Zen is as simple as pressing the button at the end. Unfortunately, the placement and ease of pressing led frequently to pressing the button accidentally and turning it off. I tried to train myself not to touch the end-cap button, but that made it awkward to hold. It can be used externally or for shallow vaginal insertion. (There’s no flared base, so don’t use it anally.)
Although the Zen claims to have these four modes — low/ medium/ high/ pulse — the “high” is no stronger than medium, and a gentle medium at that. I like the pillowy feel, but I’d love to have more power, much more power. If you prefer gentle, give it a try. It comes in three lovely colors: green, yellow, and coral.
Iroha is a line of sex toys from Tenga, best known for its penis toys: see our reviews of the Tenga Egg and the Tenga Flip Hole and 3-D Sculpted Ecstasy.